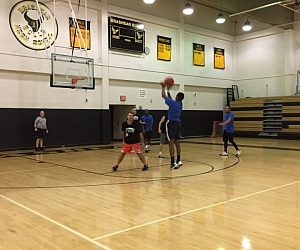 Every year we host some sort of 3v3 Basketball Tournament. Teams are guarenteed 4 refereed games (20 minutes long), a t-shirt and a prize for the champions! Teams may roster up to 4 players. In 2019, we played on a beautiful rooftop court downtown and had a blast!

On March 8, 2022, we were planning on hosting a PSL Women's March Madness 3v3 Mini Basketball Tournament. Unfortauntely, due to lack of interest, we have decided to cancel the event.

If you have ideas for a tournament you would like to see please email Jaime.

We are thrilled to host our second ever Rooftop Basketball Tournament in Downtown Pittsburgh on Sunday August 28th from 4:00 - 8:00 PM.

Each team is guaranteed at least 2 officiated 20 minute half-court 3v3 games. All teams will also get t-shirts and a prize for champions. Roster maximum is 5 players for the evening. The cost to play is $100 per team. Payment is due in full at registration.

The facility is located at 422 Stanwix Street – and is called Etage Athletic Club (formerly the City Place Fitness and Golds Gym). When you arrive, follow the signs to the gym. Everyone will need to sign a guest waiver. Then you will be buzzed up the elevator to the rooftop. Please share these directions with your team.

Parking: There is free street parking downtown on Sundays (look for the correct signage) and lots of public transportation options. If you park in their garage, your first 1.5 hours are free (anything above that you will be charged for). If you would like to take advantage of this please bring your ticket to the gym front desk to get validated as you are leaving the facility.

There are two tournament champions - the 1st place and the 5th place teams. The breakdown is as follows.

Winner (A) vs Winner (B)
Winner (C) vs Winner (D)
*Winners play in 1st Place Championship!

This is a double elimination tournament with prizes being awarded to the 1st and 5th place teams!

Many of our login issues stem from errors in the emails of invited players and can be easily resolved.

Reminder: please use your email address (the one associated with your PUMP account) as your username.

If the emails do not match it will not work.

If you cannot login, FILL OUT THIS FORM.

Any feedback on this policy can be voiced here!

COPY
The link has been copied to your clipboard