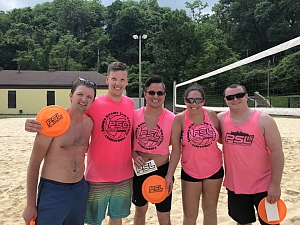 Every spring the PSL hosts a Summer Kickoff Sand Volleyball Tournament in Highland Park. The tournament, played on a Saturday, will boast teams competing for both competitive and recreational titles. Each team plays 3 matches and is guaranteed at least one best of three playoff game. The tournament is played 4 v 4 (1 woman minimum) and has a roster maximum of 8 players. Your tournament fee will include facility, equipment, ref fees, tshirts, and a prize for champions.

Who: The tournament is open to anyone! All participants must be 18+

What: Join us for the 5th Annual PSL Summer Kickoff Sand Volleyball Tournament!

About the Tournament: Each team plays 2 games to 17 points (cap 19) against the other 3 teams in their division (3 matches) and at least one best of three playoff game or consolation game (playoff games are played to 21, 21, 15). Games will be played 4 x 4 (1 woman/gender minority minimum), with a roster maximum of 8 players.

Your league fee includes: the facility, equipment, ref fees, shirts, and a prize for the champions of each division.

Many of our login issues stem from errors in the emails of invited players and can be easily resolved.

Reminder: please use your email address (the one associated with your PUMP account) as your username.

If the emails do not match it will not work.

If you cannot login, FILL OUT THIS FORM.

Any feedback on this policy can be voiced here!

COPY
The link has been copied to your clipboard